The price of the photo depends on the size produced - small or large - no limits. 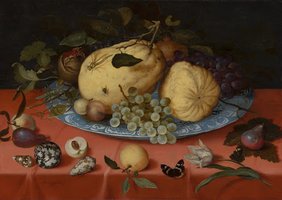 Balthasar van der Ast(1593/94 – 7 March 1657) was aDutch Golden Agepainterwho specialized instill lifesof flowers and fruit, as well as painting a number of remarkable shell still lifes; he is considered to be a pioneer in the genre of shell painting. His still lifes often contain insects and lizards.

His lifetime of works was once summarized by an Amsterdam doctor who said, "In flowers, shells and lizards, beautiful".[2]